Let me tell you about Patrick 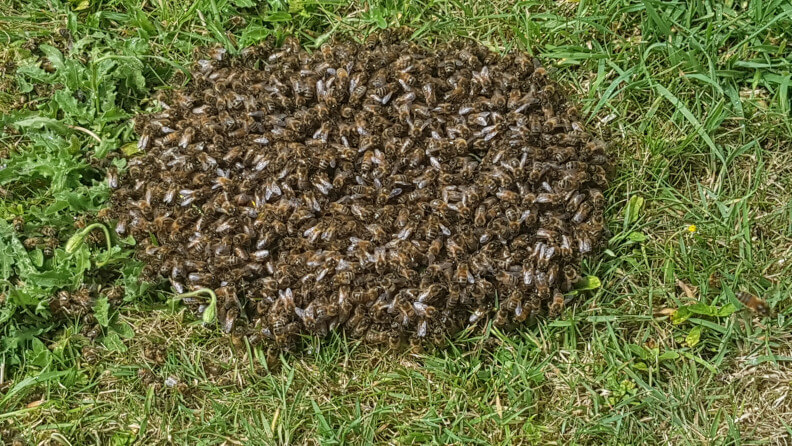 I wasn’t even sure what it was. Then I noticed the flies buzzing around it.

Except they weren’t flies.

They were bees, and they were buzzing around – well, a lot more bees, most of which were on the ground.

Ah. We have a swarm of bees that are in – there’s no better way to put it – a heap on the ground.

Fortunately, one of our staff keeps bees.

He suggested the British Beekeepers Association website, which helpfully lets you search for a beekeeper nearby. That led me to Patrick, who said he’d be with me in 20 minutes.

Sure enough, 20 minutes later he arrived.

I was expecting the full bee suit complete with – well, I don’t know what. He was wearing ordinary clothes and carrying a large polystyrene box.

Interesting: what’s he going to do, shovel them in?

No. He put the upturned box over the bees. They knew what was expected of them, and they climbed in. We waited.

“So,” I said to Patrick, failing to come up with an original question, “How often do you get stung?”

“Not often,” he confessed, “Maybe once or twice a week”. Patrick’s idea of “often” clearly differs from mine, at least where pain is involved.

Twenty minutes later, most of the bees had got into their temporary home. Patrick picked up the box, put a lid on it (smart!), put it in his car and drove off.

He made it look easy.

But that’s what people who know what they’re doing do, isn’t it? He wasn’t Googling “swarm removal from lawn” on his phone. He’d done it before; he knew what to do.

It’s not worth me learning how to remove a swarm. I’ll probably never have one again, and Googling what to do will only result in me getting stung.

If I do need another heap of bees removing then I’ll call in the experts again.

We don’t have a Patrick, but we do have a team of smart consultants who know how to manage Cloud systems. Experts who make it look easy. Because they’ve done it before.

So what about you? When you migrate your systems to the cloud, will you find a Patrick who makes it look easy? Or will you DIY, and maybe get stung in the process?