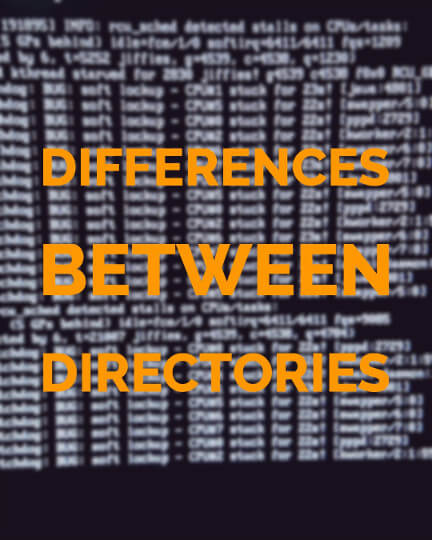 Finally, after you’ve lost count of the number of edits and consultations with Mr Google, you finally get it working. The question now is: what was the actual change or changes that resolved the problem? What’s the easiest way of comparing conf.d to conf.d.original?

I’ve seen some really complex answers to this problem, involving shell scripts or guru-level Perl incantations, but there are few much simpler, and arguably better, solutions.

Let’s take a look at a few.

Other tools – I favour vimdiff and meld – can be used to merge those differences if required. All changes to all files can be listed with diff -rq conf.d.original/ conf.d, but that may give too much output to deal with easily.

If you favour a graphical tool, dirdiff may be worthy of consideration. Here, we see the same directory comparison as before: By selecting the 10-auth.conf file and clicking on the Diff menu, we can see a visual diff of the file: The dirdiff tool has many other facilities, including the option to generate patch files to take a file from one version to another.

Some shy away from git, fearing its complexity, and it is certainly a very powerful tool. Like most good, powerful tools, though, you only need to know what you need to use. Let’s assume you’ve never used git before. Here’s how to manage the directory change problem we’ve been discussing.

Before you start making any changes, issue this command:

This is the equivalent of making a backup copy of conf.d that we used earlier.

Now make all the changes you need. Once the system is working as required, you can explore the changes. First, which files changed?

To launch a visual tool to examine and manage differences:

There are git configuration options to change the tool used.

Once you’ve finished the work, if you no longer want to keep a git repository, just remove the .git directory:

Tracking the changes when configuring an application can help both with understanding what changes are necessary and with documenting the changes. Either approach above works well, but if you’re unfamiliar with git I would encourage its use: after a short while, you’ll wonder how you managed without it.

Could This Linux Tip Be Improved?