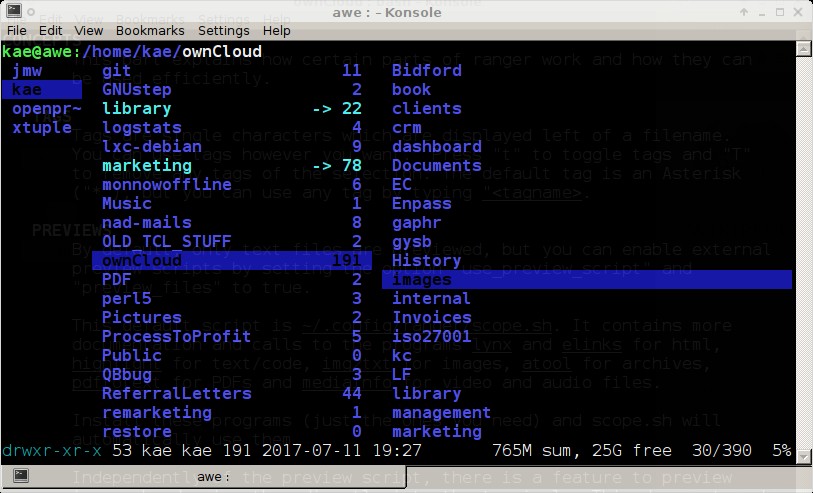 File managers have their place, but sometimes you don’t have a graphical environment to work from, or you feel that it’s quicker to simply do everything from the command line. Under those circumstances, ranger may be worth a few minutes of your time to investigate.

In summary, ranger is a curses-based file manager written in Python, and with vi keybindings by default – and it’s fast to use. There’s a lot of detail in the default display. As well as the current file and parent directories, the screen shows:

Navigation between columns can be with the arrow keys, the vi keybindings h,j,k,l, or with the mouse.

ranger supports some key pair bindings as well, again based upon the vi keybindings – and ranger is really helpful here. For example, gg will take you to the top of the middle column, just as it takes you to the top of the file in vi. But as soon as the first g is typed, ranger pops up a little window to show you all the possible second keys: Not only does gg take you to the top of the column, but there are also lots of predefined shortcuts as can be seen above – gd takes us to /dev, ge to /etc, gh to our home directory, and more. After the first g, hitting esc will cancel the command.

Other useful vi-inspired navigation shortcuts include:

The actions that may be carried out on the currently highlighted file include:

ranger has a tabbed interface if you want it. ^N will create a new tab; ^W will close the current tab; the tab key will move the next tab and shift-tab to the previous. So copying files from one location to another can be done by yy-ing them in one tab and pp-ing them in another. For operations on multiple files, they can be selected in one tab with the v key or space bar, then copied and pasted with yy and pp.

Help is available from within ranger, albeit with a somewhat unusual unconventional syntax. The following keys are defined:

There are four configuration files for ranger and, as is not uncommon, it’s possible to have local versions under your home directory that override the system-wide defaults.

I recommend running the following command, which will make local copies of the configuration files under ~/.config/ranger:

The four files created in ~/.config.ranger are:

File managers are not for everyone, but ranger does have some advantages. For me, key is its ability to preview many types of file without having to launch external graphical programs. That makes it ideal for tasks such as tidying up directories.

In this article, I’ve barely scratched the surface of what ranger can do. It is a hugely configurable, very powerful text based file manager.

Could This Tech Tip Be Improved?